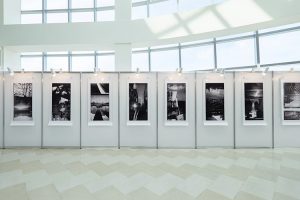 For decades, Vancouver has been the destination for the immigrants of Hong Kong. Moreover, there is a phenomenon of double-reverse migration that, to a certain extent, has been shaping these two cities across the Pacific. Both the leaving and the returning Hongkongers have been looking for a better life to the other shore.

‘Tête-bêche’ is an ongoing collaboration between Thomas LIN and Vancouver-based installation artist G. HO. The duo were acquainted in Hong Kong since childhood. ​LIN invited HO to take photographs of his city and exchange the film rolls with his for the second exposure. Composed of a series of unpredictable overlapping images where the landscape of the two cities merge and blur, the project meditates upon the questions of memory, history, destiny and probability. This is an unusual photographic process that the subject matter is no longer derived from the photographers’ conscious will but from the merged realities found in their dialogues.

This project is inspired by LIU Yichang’s influential novel, ‘Intersection’ *. ‘Tête-bêche⇋Paramita’ ** has been exhibited in London in 2022, Vancouver in 2019, Gansu in 2018, Pomona CA in 2015, Richmond BC, Taipei and Hong Kong in 2014, and was collected by the Hong Kong Heritage Museum.

** Tête-bêche: French for head-to-tail, a philatelic term for an unseparated pair of stamps that one is inverted in relation to the other. Paramita: Buddhist term means “to the other shore” and transcendent.