Epiphany
Report to the King
Epiphany

Report to the King 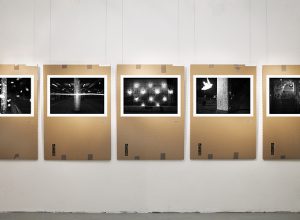 TSANG Tsou-choi (曾灶財) (1921-2007), claimed himself “The King of Kowloon” (九龍皇帝), was a Hong Kong original, who never saw himself as an artist but was hailed internationally as one. TSANG spent five decades roaming the metropolis, scrawling his idiosyncratic calligraphy on walls, lamp-posts, electrical boxes and pedestrian underpasses. He is a controversial figure in Hong Kong. While some have criticised him for damaging public property, others regard his rebellious writings as a courageous attempt to defy convention and authority.

Some say his calligraphy, peppered with obscenities and abuse toward Britain’s Queen Elizabeth, is naive and an eyesore. But its quintessential Hong Kong symbolism has inspired other artists and has drawn international acclaim.

It was rumoured that when he died in 2007, TSANG had created more than 50,000 pieces of work in the streets. But now his works are in danger of vanishing completely and only a few remain.

‘Epiphany’ (顯靈) uses the deeds of the late “King of Kowloon” to add to the conversation of the Hong Kong cultural identity and conservation. In each of the ruins of the remaining calligraphic works, Thomas LIN created some lights to metaphor the apparitions of the King’s spirit.

“I regard each shooting as something like a public art performance and a ritual to connect the departed.”